Hats Off: PhilaU Class of 2017 Celebrated at 133rd Commencement

More than 1,000 students received their degrees at Commencement at the Pennsylvania Convention Center.

On a picture-perfect spring day, 1,011 students–including 633 undergraduate and 378 graduate students–received their degrees at Philadelphia University’s 133rd Commencement May 15 at the Pennsylvania Convention Center.

“This is your legacy,” PhilaU President Stephen Spinelli Jr. told graduates. “From a University that leads change and defies the status quo come graduates who will be leaders in their industries. At Philadelphia University, you were collaborative, innovative, passionate professionals.”

“The challenge begins as soon as you leave this building,” Dr. Spinelli said. “You are ready for it. You are the designers, architects, engineers, scientists, medical professionals and entrepreneurs who will build a better world.”

“You are the designers, architects, engineers, scientists, medical professionals and entrepreneurs who will build a better world,” President Spinelli said.

The undergraduate student speaker Stephen Robertson, who received his B.S. in organizational leadership, founded HUB for Humanity, an organization that seeks to address social issues in a sustainable way.

“When you look into this crowd today, to the left and to the right of you, you see a diverse group of scholars ready to thrive in diverse, challenging environments,” said Robertson, who plans to further develop HUB for Humanity into a professional, nonprofit organization. “Not only did we traverse an academically rigorous setting, we achieved intellectual and personal growth. The key is we did it with integrity, creativity, curiosity, ethics, responsibility and the free exchange of ideas.”

“You cannot wait for your destiny to become a matter of chance,” urged Erving, widely regarded as the greatest player of his time and an all-star who changed the way the game was played. “You must always keep it as a matter of choice.”

Erving, who scored an astounding 30,026 points in his combined ABA-NBA career and was inducted into the Naismith Memorial Basketball Hall of Fame in 1993, was awarded the honorary degree Doctor of Humane Letters. “You’re a true innovator and team player,” said Anthony Vitullo Jr. ’97, a member of the PhilaU Board of Trustees.

Liong Keng Kwee ’68 also received the honorary degree of Doctor of Humane Letters for a remarkable career in both business and public service, noted Robert Lockyer ’68, a member of the PhilaU Board of Trustees. A textile management and marketing graduate, Kwee is managing director of the successful property development firm Pontiac Land Private Limited. He was a board member of the Viva Foundation for Children with Cancer, a member of the board of directors of the Singapore Chinese Orchestra and chairman of the Singapore Art Museum’s Board of Trustees. In addition, Kwee joined the PhilaU Board of Trustees in 1998, received the PhilaU Leader of Innovation medal in 2010 and established the Florence Stewart Scholarship at the University.

At the graduate ceremony, Mark L. Tykocinski, M.D., provost and executive vice president for academic affairs and the Anthony F. and Gertrude M. DePalma Dean of Sidney Kimmel Medical College at Thomas Jefferson University, was awarded the honorary degree of Doctor of Humane Letters and gave the keynote address. He will serve as provost of the new comprehensive Jefferson when Philadelphia University and Thomas Jefferson University officially combine as expected this summer.

He spoke about his wife’s late uncle who closed his letters with “the wind is free” in place of a signature and described how he saw the winds of student creativity on full display at the recent PhilaU Fashion Show.

“Wind is free of constraint,” Tykocinski said. “It blows freely in all directions, pushing obstacles aside.”

Jacqueline McCarron ’16 received the President’s Award for Excellence for a distinguished graduate student. She earned her innovation master of business administration and will join the market sales team of Sparta Systems.

The graduate student speaker Dyandra Raye Brown received her M.S. in global fashion enterprise. At PhilaU, she managed two businesses that she founded and co-founded: the wardrobe styling service Styled by Dyandra and Boutique Your Closet, which specializes in custom closets, styling and wardrobe organization. Brown now will work as assistant director for the Cashmere Sale in New York.

“After only two years at PhilaU, I have grown and achieved milestones that I could not have imagined,” she said. “Each class is a new challenge, each international trip is a new opportunity and each University event is a memorable moment. Today, we celebrate our accomplishment of mastering an education and welcome a new group of the world’s finest leaders who are prepared to reach for the moon and land on the stars.”

See more than 1,000 photos from the undergraduate and graduate ceremonies below. 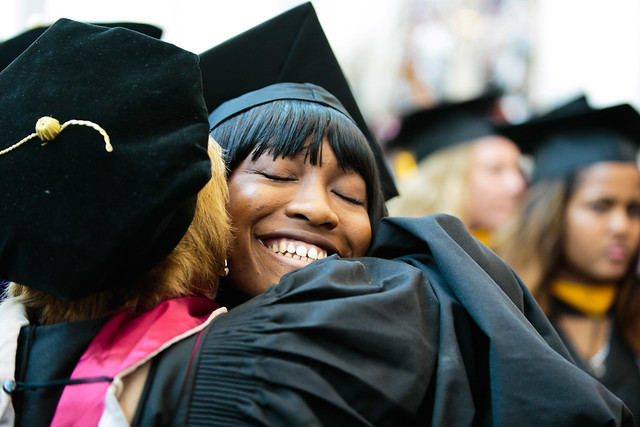