The name for the combined institution, which will be the fifth largest in Philadelphia, is Thomas Jefferson University and will be referred to as Jefferson in common usage. The Honors Programs will be in the newly formed Philadelphia University Honors Institute. All existing academic programs and degrees from both universities will continue and many will be expanded.

The formal announcement was made by university leaders June 29 in front of hundreds of faculty, staff, students, trustees, alumni and area dignitaries in the Gallagher, Athletic, Recreation and Convocation Center.

“The new Jefferson is a dynamic educational ecosystem where innovation, creativity and receptivity to change are the norm and artificial distinctions between practice and education blur,” said Stephen Spinelli Jr., PhD, president of Philadelphia University, who will serve as chancellor of the combined university. “Education should be tailored to real-world demands and enable students to curate their degree programs and educational pathways to better prepare them as professionals. Jefferson is reimagining the future of work, the future of health and the future of education to deliver even greater return on investment to our students while also benefitting alumni, employers and society.”

Supported by design and systems thinking, innovation, entrepreneurship, empathy and the modes of thought central to the liberal arts and scientific inquiry, the new Jefferson creates a unique model focused on interprofessional and transdisciplinary approaches to learning, Spinelli said. It provides a vibrant and expandable platform for professional education and the ability to prepare students for current and yet-to-be-imagined 21st-century professions.

In particular, the new Jefferson will build on Thomas Jefferson University’s and Philadelphia University’s proven approaches to aggressively add even more value for students through curricular innovations that include leading-edge programs in emerging professions; accelerated programs that enable students to earn undergraduate and graduate degrees in a shorter time; valuable opportunities for scientific and applied research; and a new model for experiential learning and internship opportunities with some of the country’s top employers.

“Although the world is changing rapidly, higher education is stuck using old models to teach students how things used to be done,” said Stephen K. Klasko, MD, MBA, president and CEO of Thomas Jefferson University and Jefferson Health. “We need to help students lead change, not react to it. We are creating a comprehensive university centered on what’s going to be obvious 10 or 20 years from now, but doing it today. A transformative model of education focuses on the skills of leadership, lifelong learning, empathy, communication and creativity to draw your own path to success. We will use this combination to ‘start over’—building preeminence in experiential, professional education, research and discovery.”

Among the many highlights from the combination ceremony, Chuck Lewis, Jefferson enterprise executive vice president and chief growth and marketing officer, revealed the new visual identity that “celebrates our history and signals forward-facing change.” The symbol is a modern academic shield formed by blending the letters T, J and U and creating the letter P silhouetted in its counter space, which infuses the shared equities and vision.

“It is a striking identity system that represents all of the students and disciplines that are now part of the new Jefferson—from medicine, health, population health and science to fashion, architecture, design, engineering, textiles, business and the liberal arts,” he said.

Eileen Martinson ’86, chair of Philadelphia University’s board of trustees and co-chair of the Jefferson academic board, described the importance of the historic day.

“The alumni of both institutions have always been the leaders of change—through research, across disciplines from textiles to medicine and through many generations,” she said. “Our alumni have had the courage to find a new way to serve people more profoundly and make a better world. Now, it’s our turn, and I cannot be more excited.”

Naismith Memorial Basketball Hall of Famer and Head Men’s Basketball Coach Herb Magee shared that sentiment, telling the capacity crowd, “I’m thrilled this is happening. I can’t wait to start next year.” Philadelphia University’s mascot, Phil the Ram, will be the Jefferson mascot, and the 17 intercollegiate athletics teams will be known as the Jefferson Rams.

Edward Rendell, former governor of the Commonwealth of Pennsylvania, current chair of the Jefferson Presidential Leadership Council, and East Falls resident for 36 years, recalled how he attended Magee’s 1,000th win and shared a favorite quote from President John F. Kennedy. 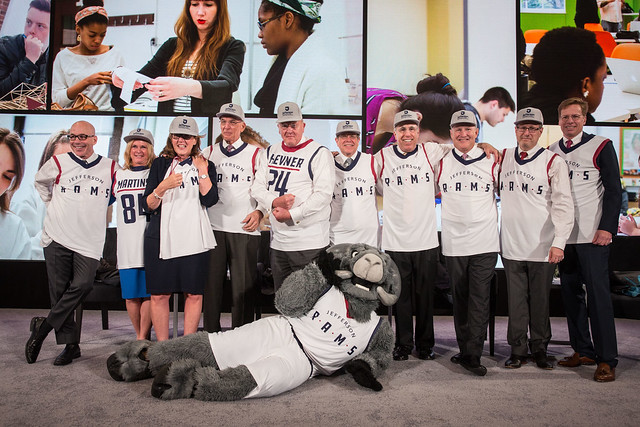 In order to consummate the combination, notices were provided or consents obtained from approximately 30 accrediting agencies, including Middle States Commission of Higher Education, the Departments of Education of the United States of America and Commonwealth of Pennsylvania, the NCAA and the Central Atlantic Collegiate Conference.

In addition to nine colleges and three schools from both universities, the formation of the Philadelphia University Honors Institute and the Philadelphia University Design Institute will be key components of the combined university’s educational ecosystem. Jefferson will include campuses in Center City, East Falls, Montgomery County, Bucks County and Atlantic County; a growing online presence; numerous clinical sites; and an extensive global footprint with locations in Italy and Japan, study abroad sites and curricular and co-curricular partnerships and networks. Jefferson will be home to more than 7,800 students, 4,000 faculty members and 78,000 alumni.

“The university offers more than 160 undergraduate and graduate professional programs all with a grounding in the liberal arts,” said Mark Tykocinski, MD, university vice chancellor and provost, and dean of the Sidney Kimmel Medical College. “This union allows us to leverage our diverse academic programs to provide robust interprofessional and collaborative learning across each profession and discipline. We’re eliminating the program silos that are the norm in higher education in favor of creative connections between disciplines—because that’s where the greatest human advancements are made and what will best serve our students and society in the future.”

“As of today, this is the no-limits university,” Klasko said.

Read more about the combination here.